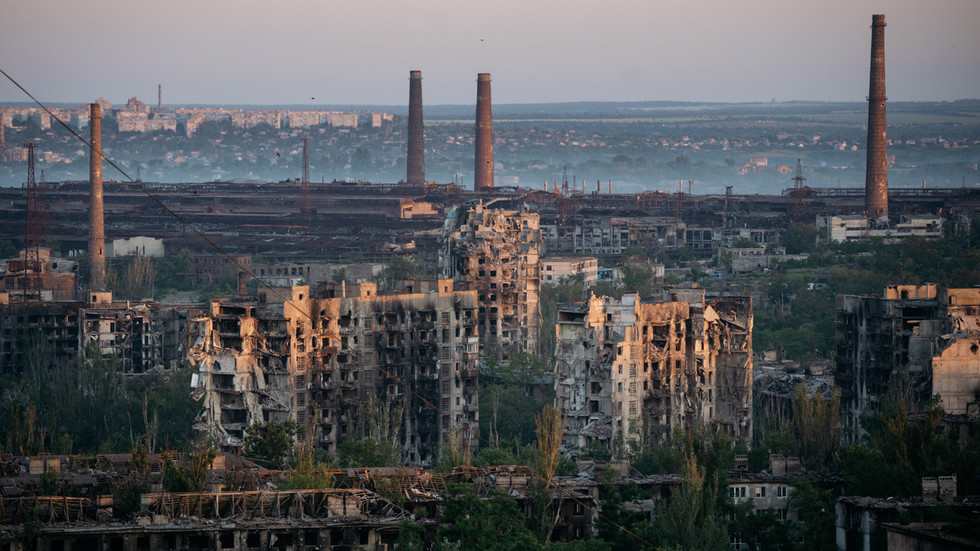 These images were taken six months apart, in summer and in winter, and show efforts to restore the Azov sea pearl 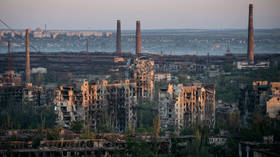 A view of the Azovstal Iron and Steel Works plant in Mariupol © RT / Arseniy Kotov, special report for RT

It’s now over seven months since Mariupol – the second largest city of the Donetsk People’s Republic – was liberated from Ukrainian forces, which included the neo-Nazi Azov Regiment. The city has become one of the symbols of Russia’s military campaign, and victory there has arguably been the main triumph, so far.

Since the fighting ended, locals have tried to  return to peaceful life in the now Russian city. Photojournalist Arseniy Kotov visited twice – in the summer and winter of 2022. His photographs reflect its most recent history and its ongoing reconstruction, which is one of Moscow’s top priorities.

I first visited Mariupol in the summer. To get there, I had to hitchhike. The driver dropped me off at Shevchenko Boulevard, one of the city’s central streets – named after the iconic Ukrainian poet. The nearest building, which was on a hill, towered above all the surroundings. To get a better view, I walked upstairs and went out on the balcony of an apartment that was missing doors and had damaged walls. From there, I had a pretty good view of the Azovstal Iron and Steel Works plant, now known around the world because of the combat there. 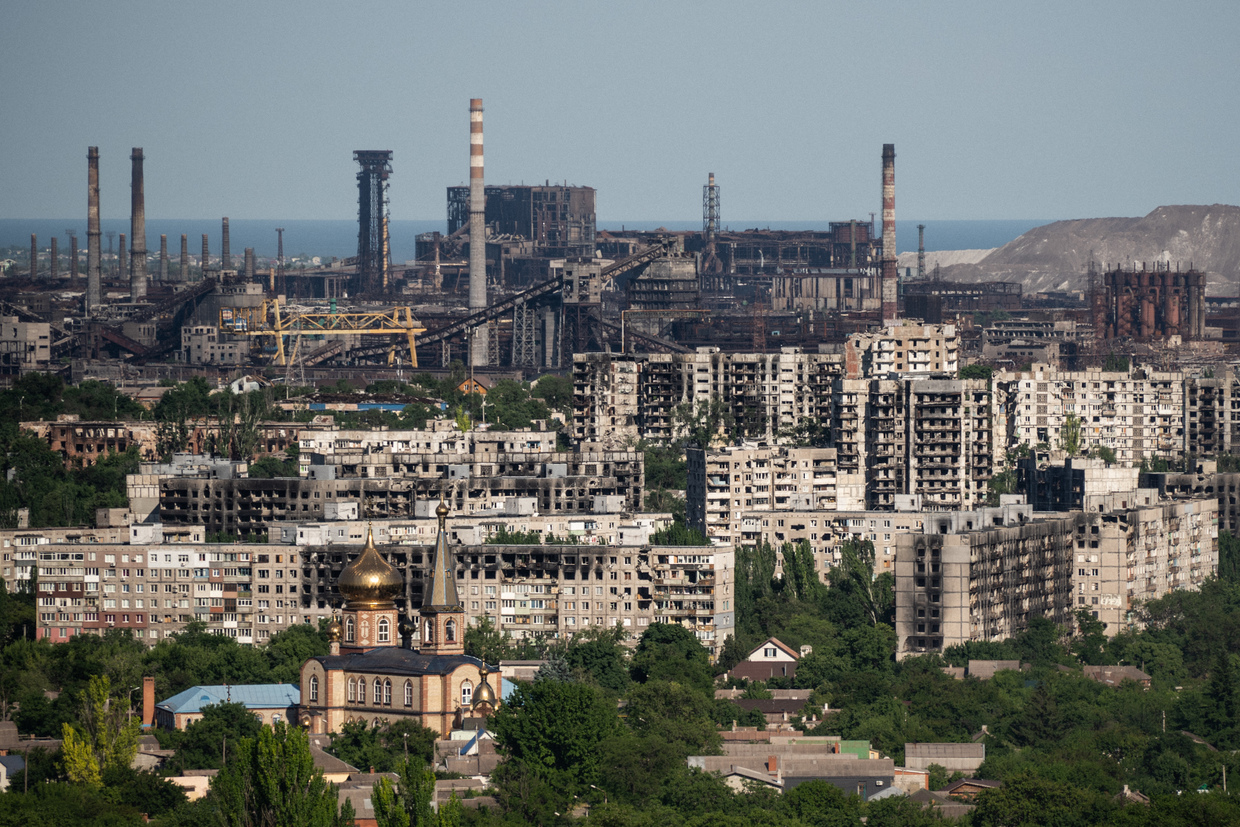 A view of the Azovstal plant from a 16-story building on Shevchenko Boulevard © RT / Arseniy Kotov, special report for RT

I walked to the city’s west side and met a 30-something man and woman roaming around a collapsed nine-story apartment building. They were well dressed, in a trendy way, but were collecting trash in the ruins. They asked me not to photograph them. 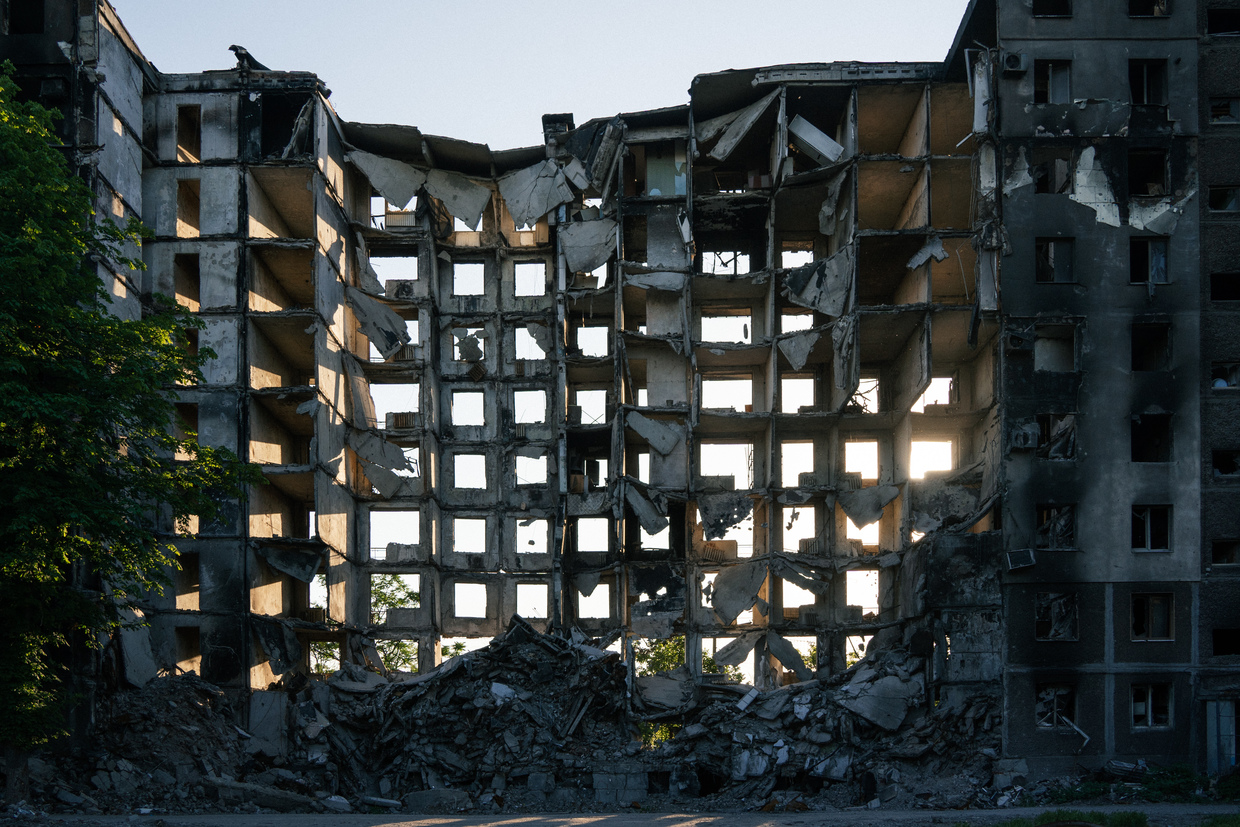 The ruins of an apartment building on Kuprina street © RT / Arseniy Kotov, special report for RT

The city was full of graffiti scribbled after the arrival of Russian troops. Some of the inscriptions demonstrated the locals’ attitude towards the Kiev authorities or other such issues, while others were directly related to survival. “People live here” was one of the most frequent inscriptions. It was meant to protect the lives of residents from grenades thrown by the army when clearing the area.

Photo captions: Inscription on a local garage: “Shame on Ukraine,” inscription on the gates of a house: “People and children live here,” inscriptions on a house on Metallurgov Prospect: “No war,” “Alina and Lera are sexy.” © RT / Arseniy Kotov, special report for RT

By June, most streets were clean of waste. But burned-out cars were still stacked in the yards and traces of former battles were evident throughout the city. 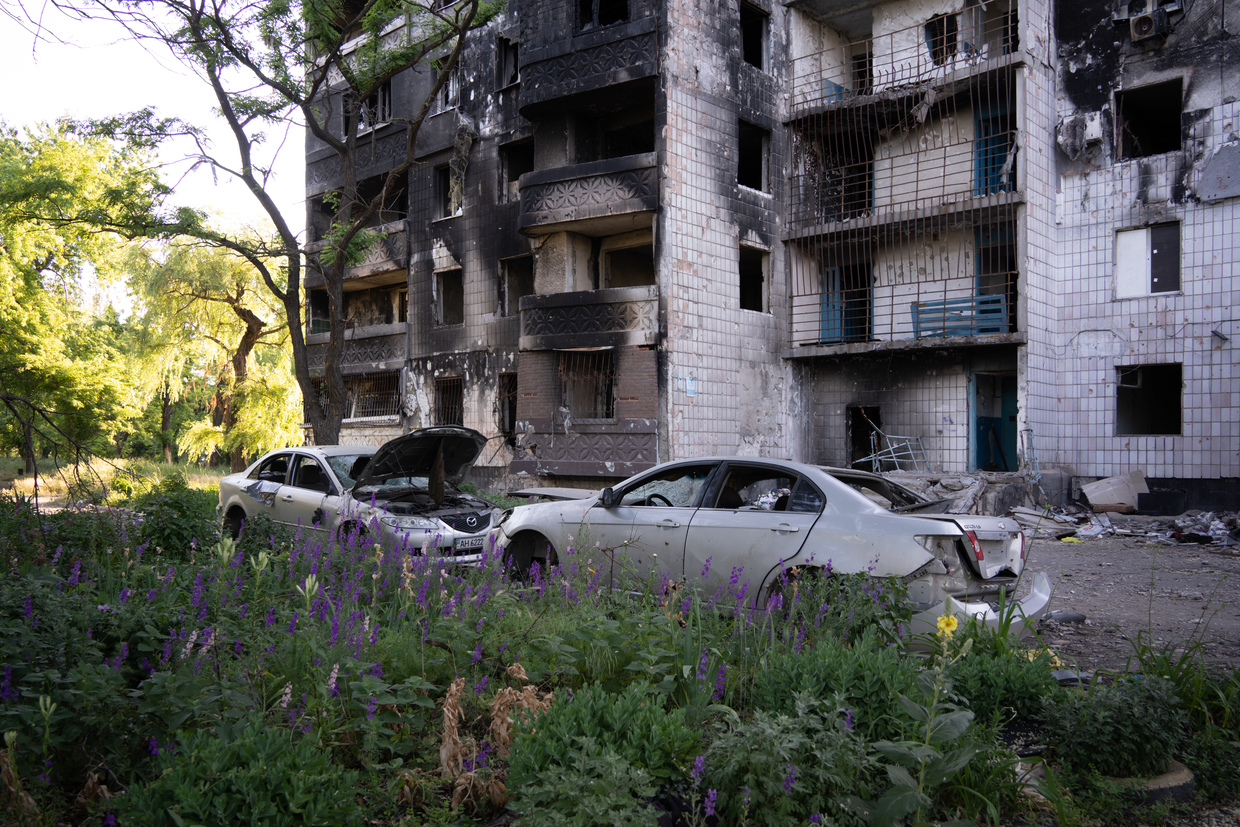 Burned cars in the yard of an apartment building located at 123 Mira Prospect © RT / Arseniy Kotov, special report for RT

Just a short walk from these ruins is the city’s central square. It used to be called Lenin Square and had a monument to the founder of the Soviet Union in the center. Following the 2014 coup in Ukraine, the monument was taken down and it became known as Freedom Square. In June 2022, the original name was restored, but the monument hadn’t been replaced yet. 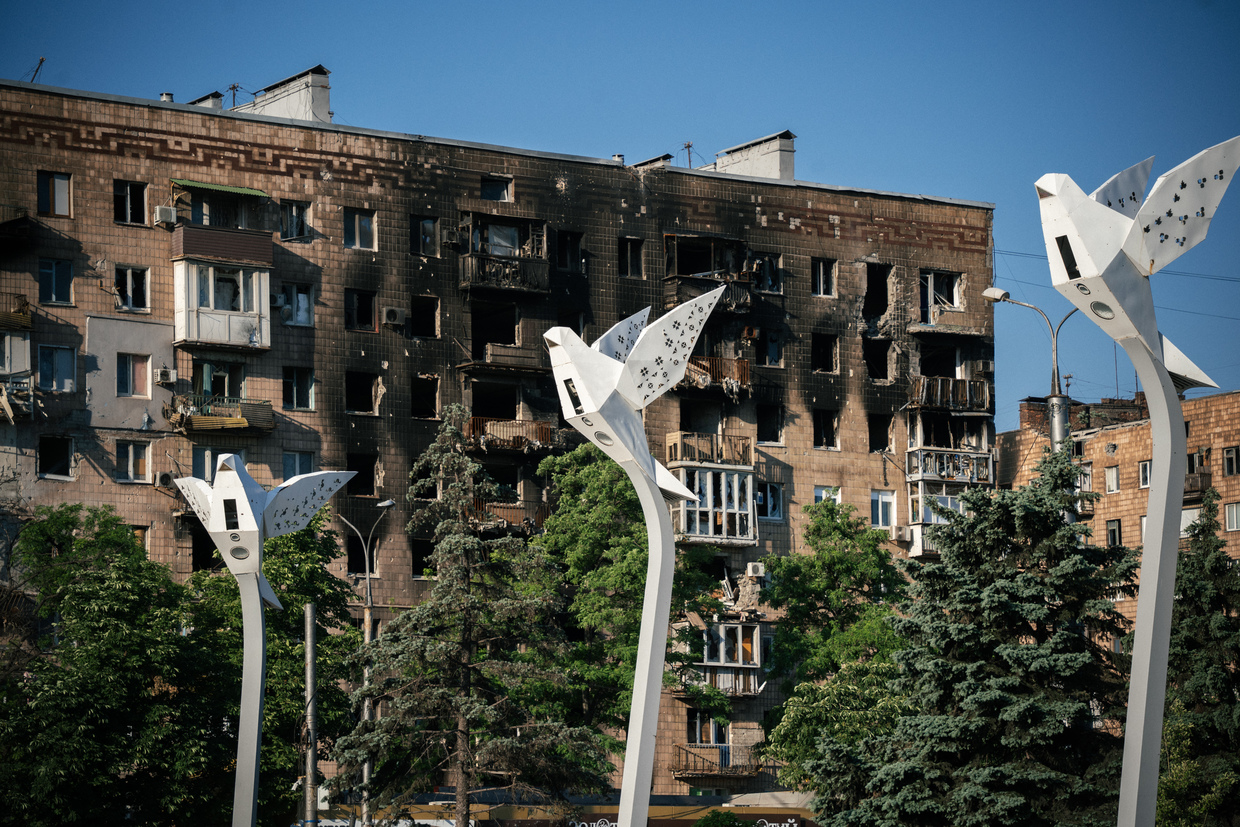 The local Drama Theater is located nearby. During the raging battles in the city, the neo-Nazi Azov regiment promised to “evacuate” local residents to this theater. The building was also used as a bomb shelter. On March 16, while full of people, it was blown up, allegedly by Ukrainian nationalists. The exact number of victims remains unknown to this day. 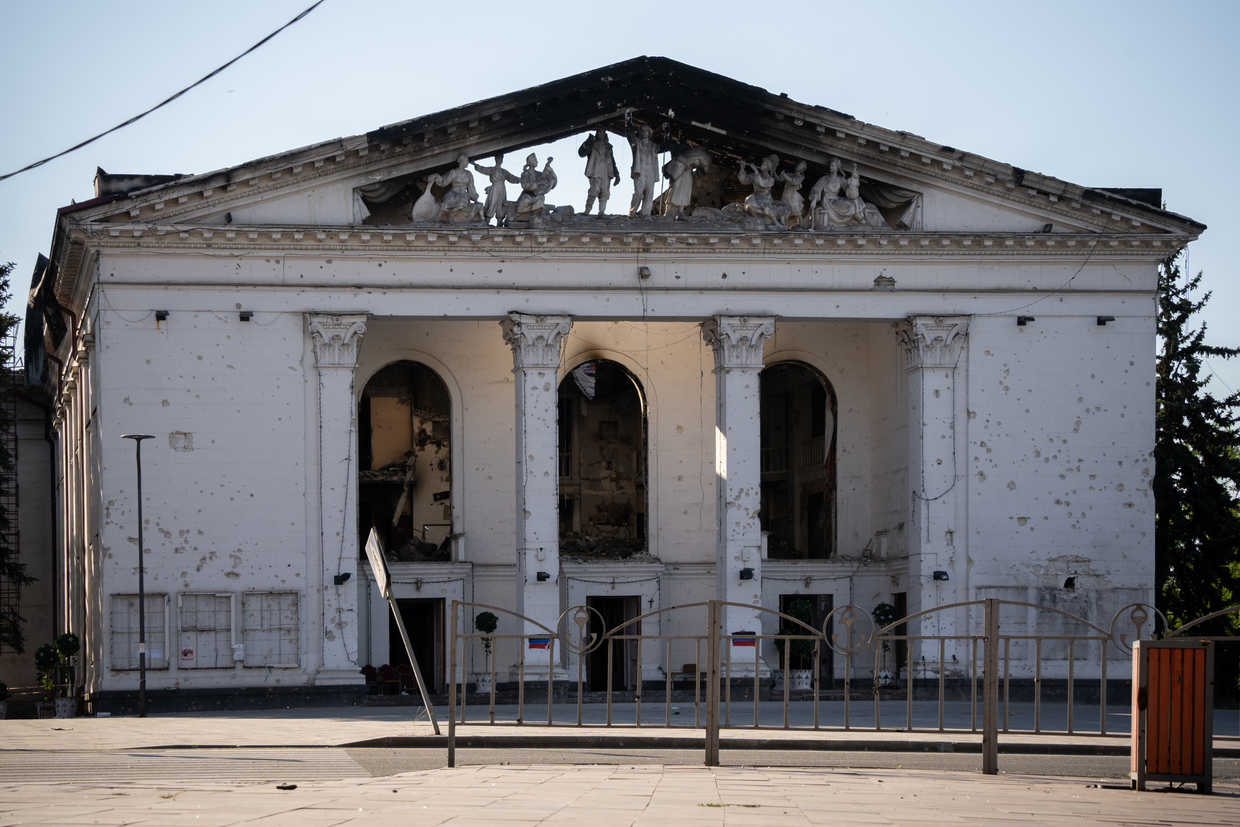 On the outskirts of the city, you can see the everyday working life of one the largest port cities on the Azov Sea. On April 13, last year, joint Russian and Donetsk People’s Republic forces liberated the seaport of Mariupol. All hostages, both in the facility and aboard the ships, were freed. The port itself wasn’t severely damaged and is currently used for transporting cargo. 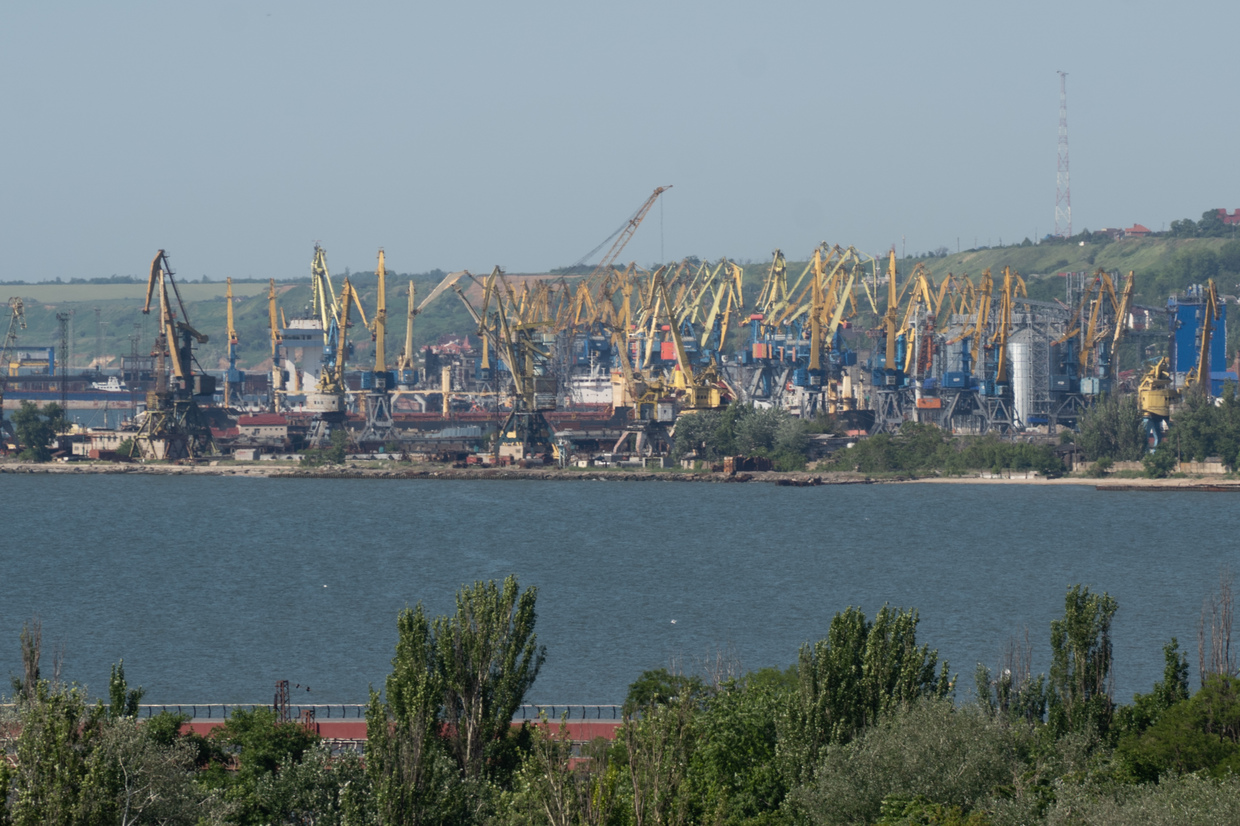 For the past eight years, this railway station has housed abandoned electric trains, which used to connect Mariupol with the regional center, Donetsk. The carriages were destroyed during the intense battles of 2022. 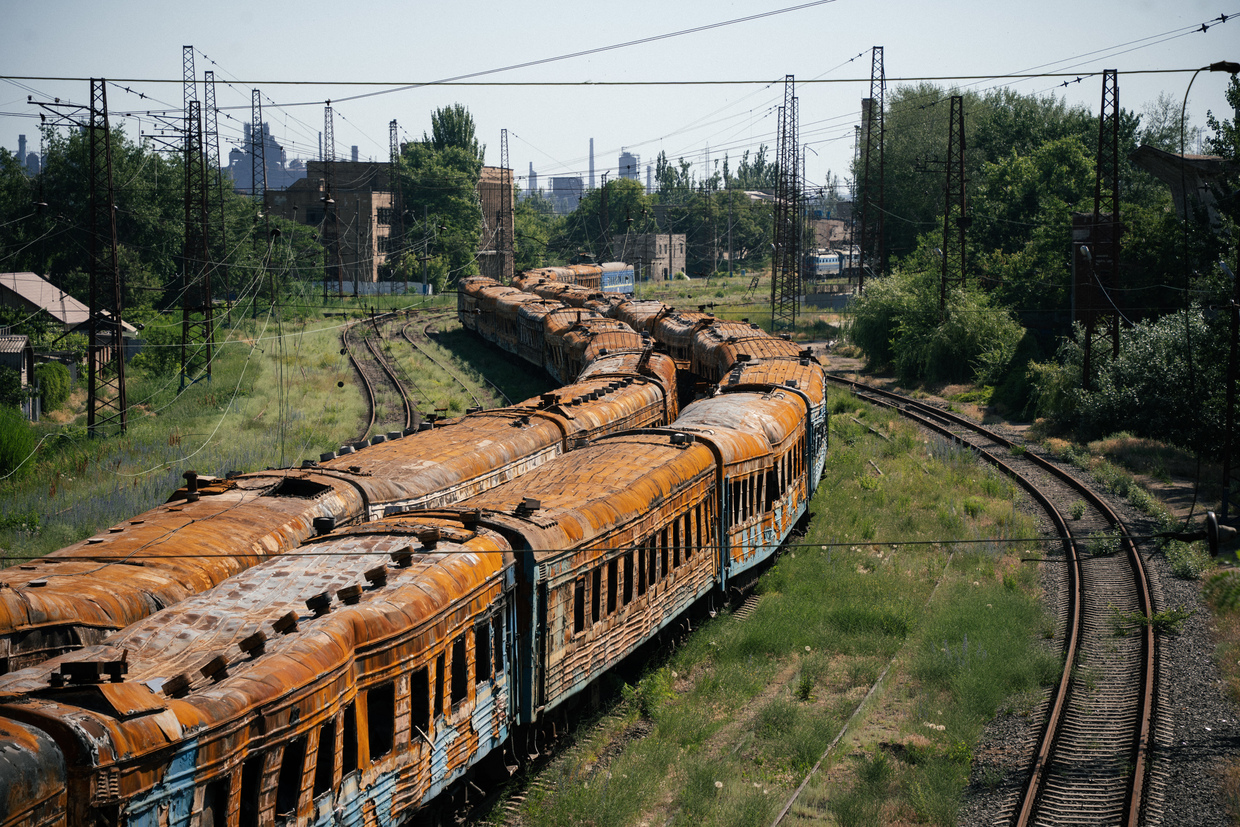 Last June, the city still looked abandoned, but people had already started gathering at beaches. Mine explosions still occurred on the Left Bank beach, but that didn’t stop the locals from enjoying themselves by the sea. 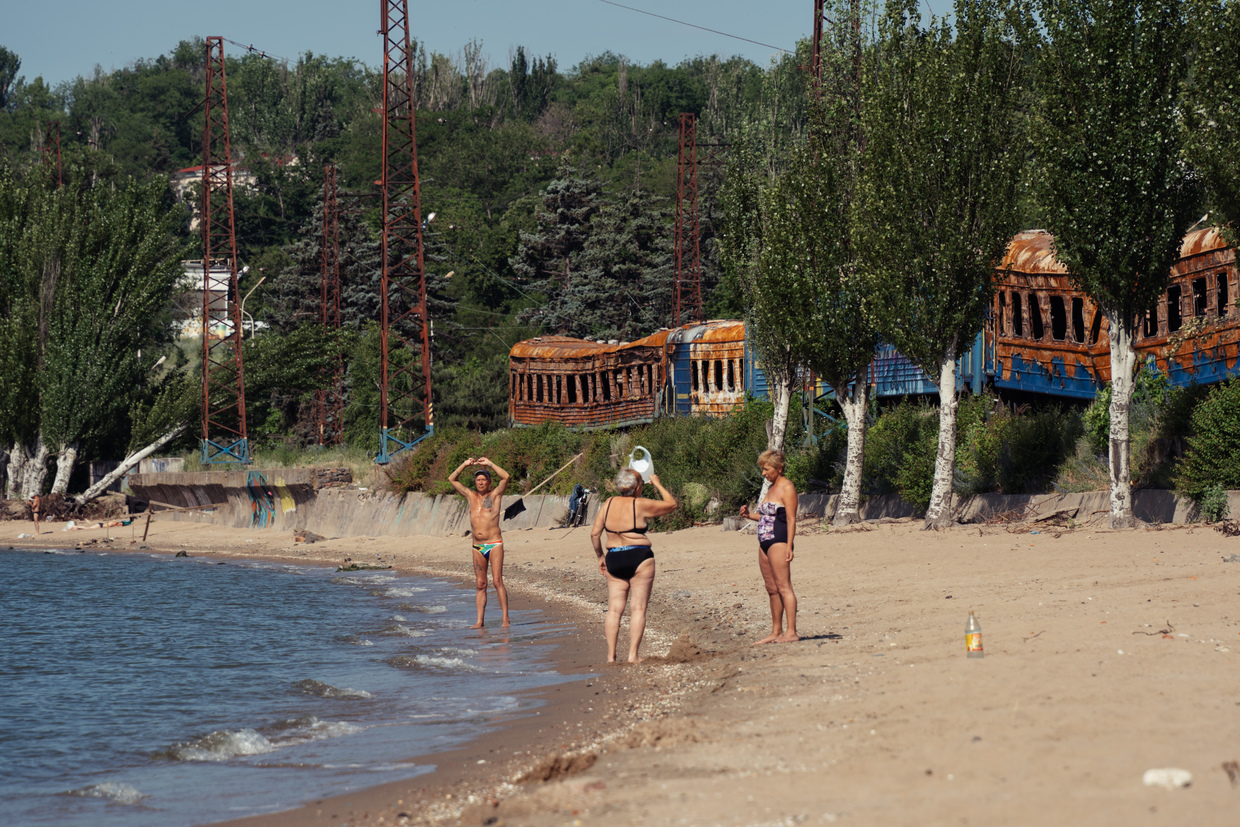 Tram Depot No.2 at the entrance to Mariupol was wrecked during the battles. On March 2, 2022, the vehicles stopped operating. The reconstruction of some city routes is currently being discussed. 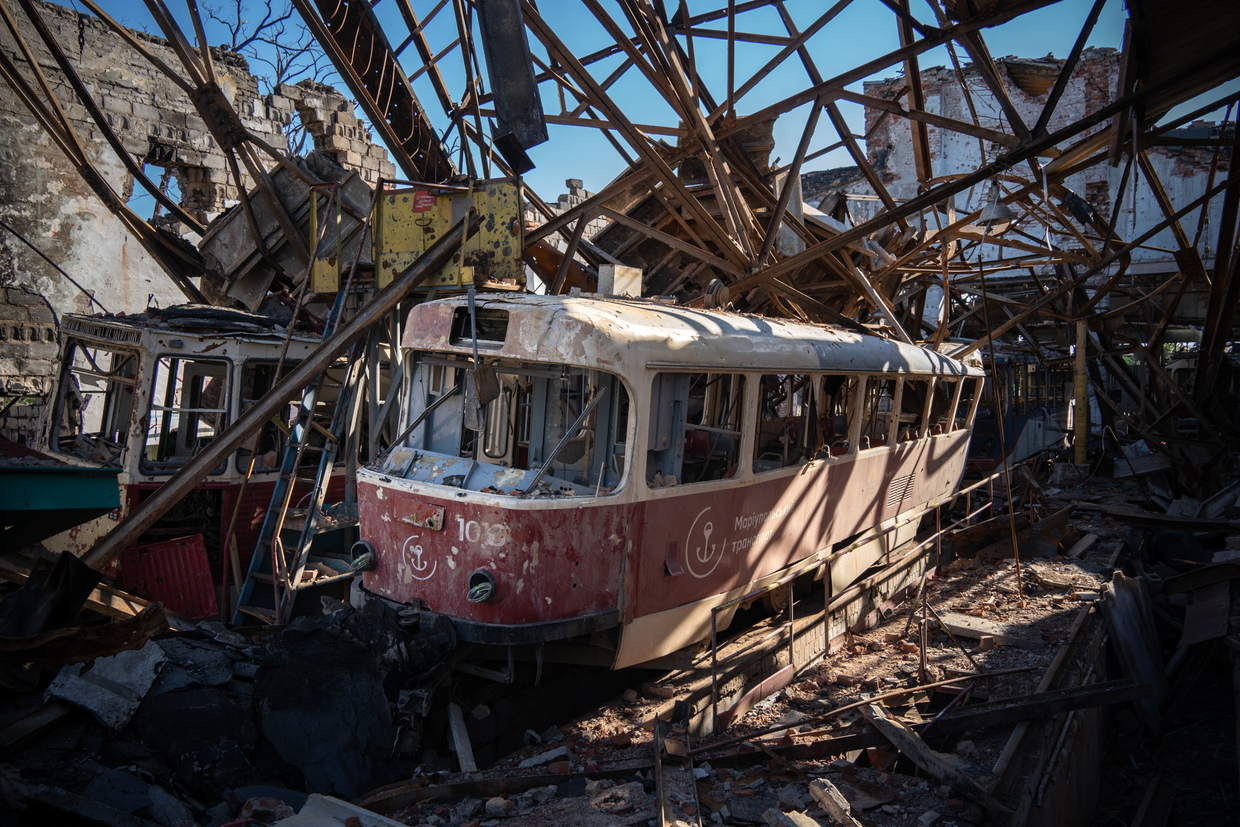 Like a major part of the Left Bank district, Victory Prospect was severely affected by the fighting. In the summer, this part of the city seemed almost bereft of life. 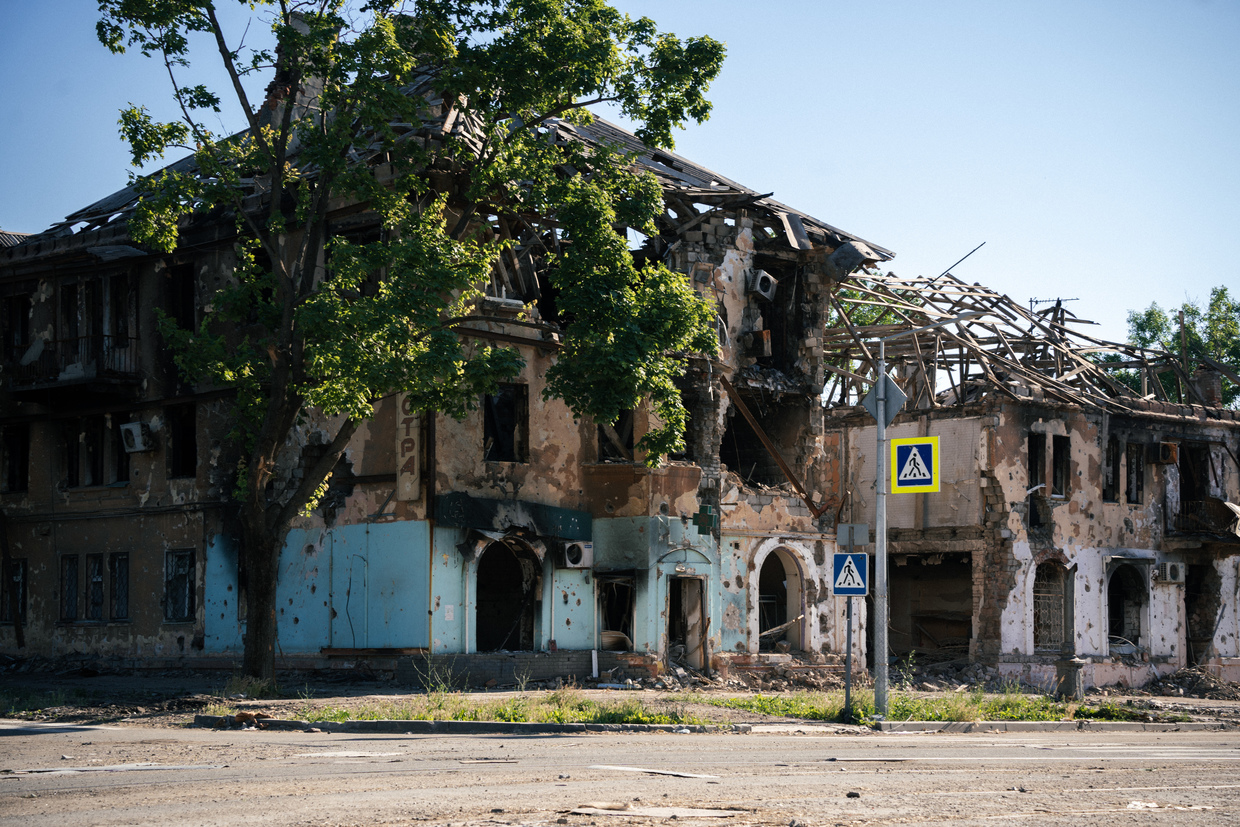 The closer we get to Azovstal, the greater the damage. This house stands just a few blocks from the site of the plant. The buildings here have been damaged but can still be repaired. Blocks of houses to the north have already been demolished. 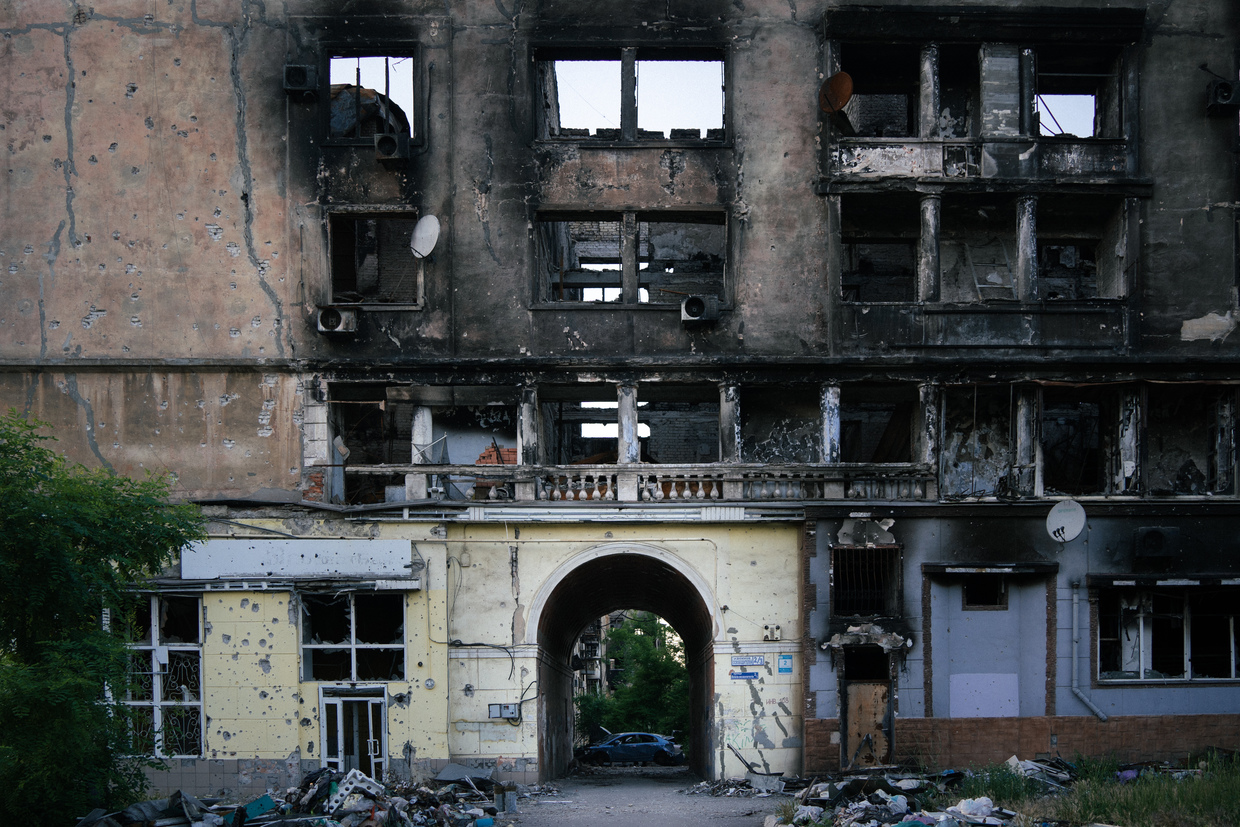 A whole section of this building collapsed due to shelling or an aerial bomb, with a small remaining panel at the top forming a sort of arch. It was taken down by November. 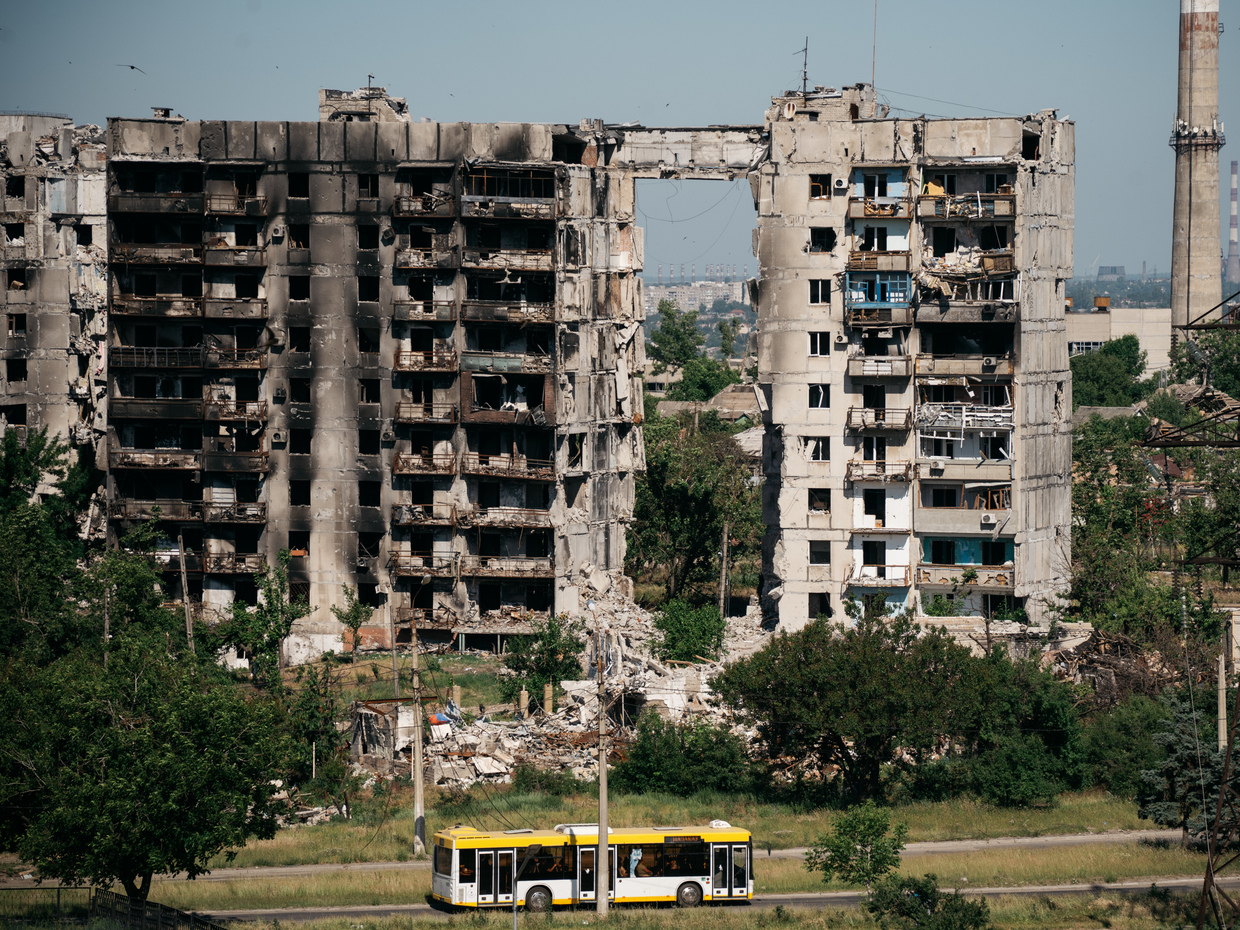 The house with the “arch” © RT / Arseniy Kotov, special report for RT

This photo, taken in the summer, shows the damage to the Left Bank district close to the Azovstal plant. By the fall, when I returned here, most of the ruined buildings had been demolished. A new residential district will be built at the site. 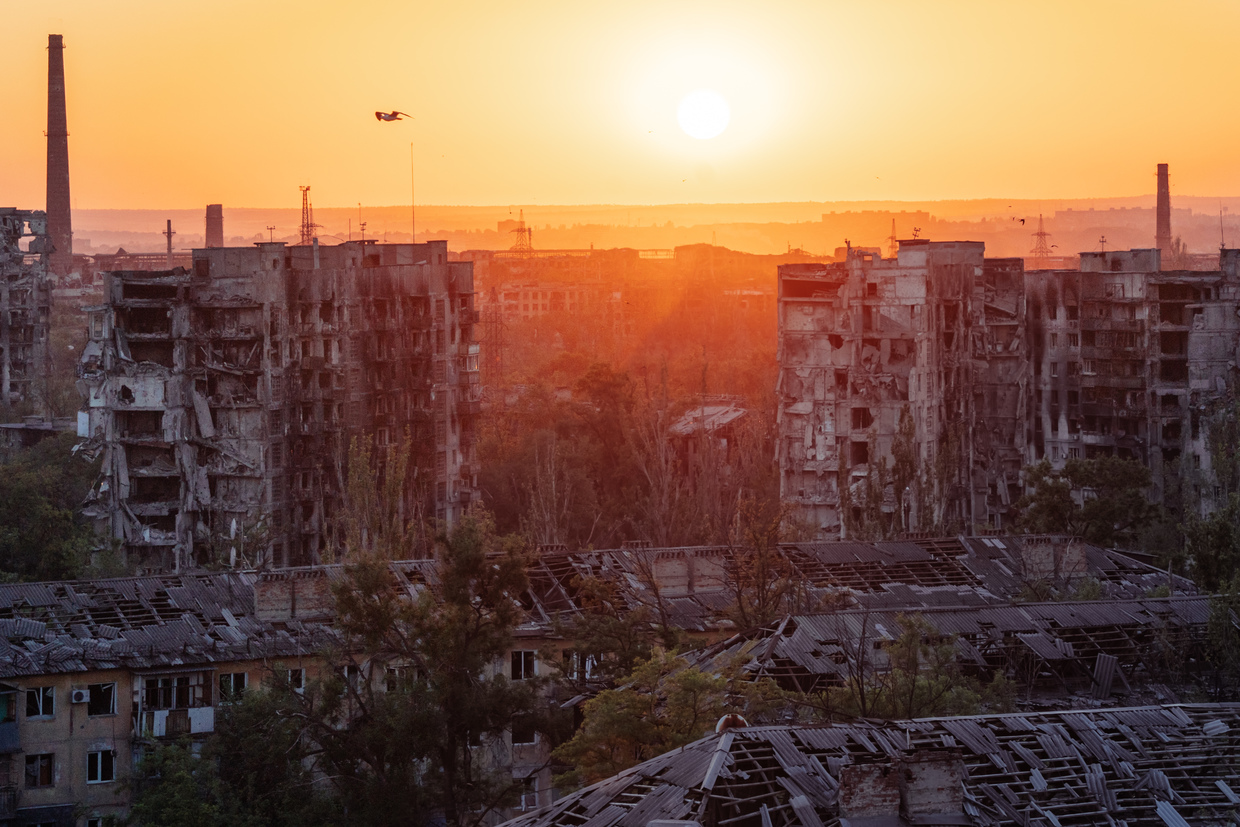 In June, explosions could be heard everywhere. The fighting had stopped, but the site of the plant, as well as many other parts of the city, were still mined. Sappers were working throughout the city. 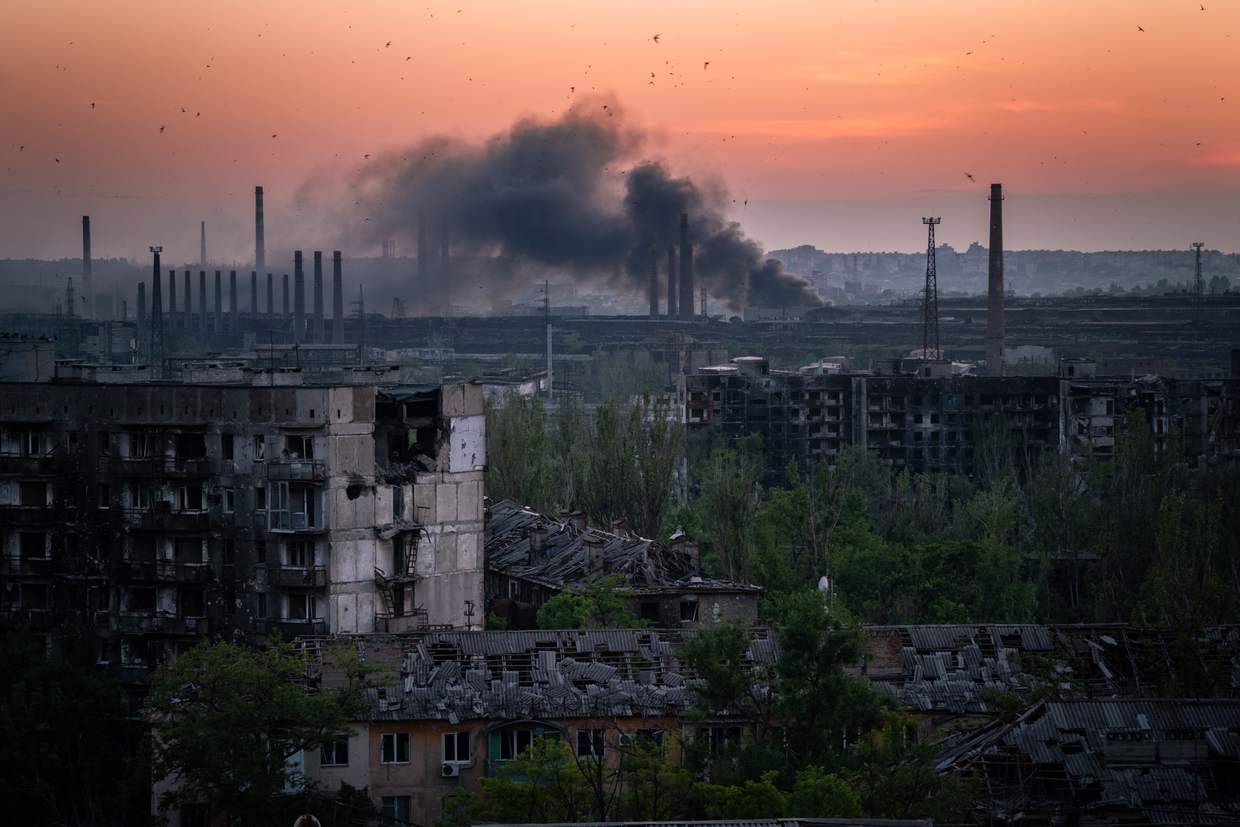 Demining in progress at the site of the Azovstal Iron and Steel Works plant © RT / Arseniy Kotov, special report for RT

Azovstal Iron and Steel Works is a huge metallurgical plant that had been in operation since 1933. Its site extends over 11 square kilometers (4 square miles). The plant has 41 shops, 80 large facilities, and six giant blast furnaces. It was severely damaged during the siege. In the spring of 2022, Azovstal was occupied by the Armed Forces of Ukraine, including the Azov neo-Nazis. The battle lasted from March 18 to May 17.

Similar damage can be found throughout the area. According to the current plan of city development, the plant will be demolished, and a park will be built on the site. However, the demolition process hasn’t started yet. 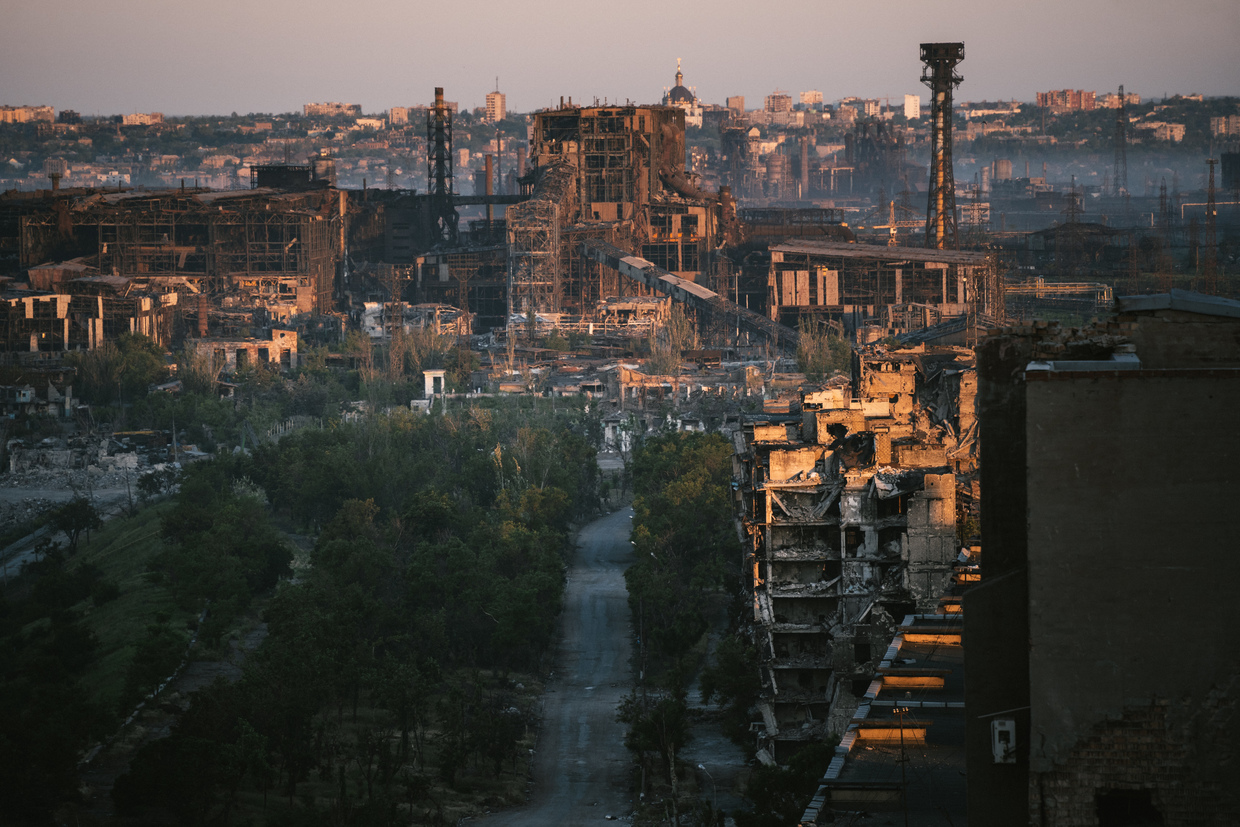 The city’s covered market was badly damaged during the fighting. The dome was hit by several shells and the working area riddled with shrapnel. When passing through the structure in the summer, people had to ward off a huge pack of stray dogs. Once fed by the merchants, they now looked thin and starving. 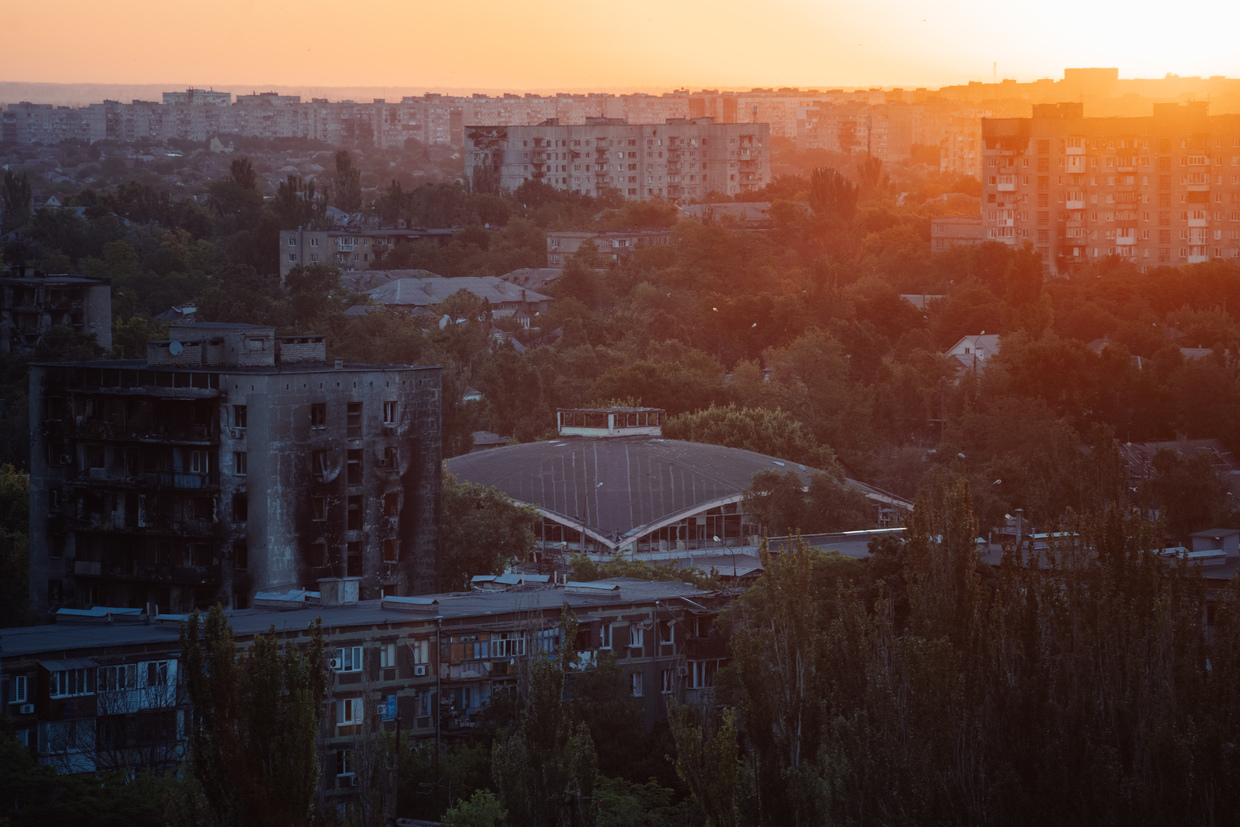 The dome of the market in Mariupol © RT / Arseniy Kotov, special report for RT

In the summer, a large part of the city still had no water, gas, or electricity. Local residents, who decided to stay, received aid from the Russian Armed Forces, volunteers, and humanitarian aid organizations. 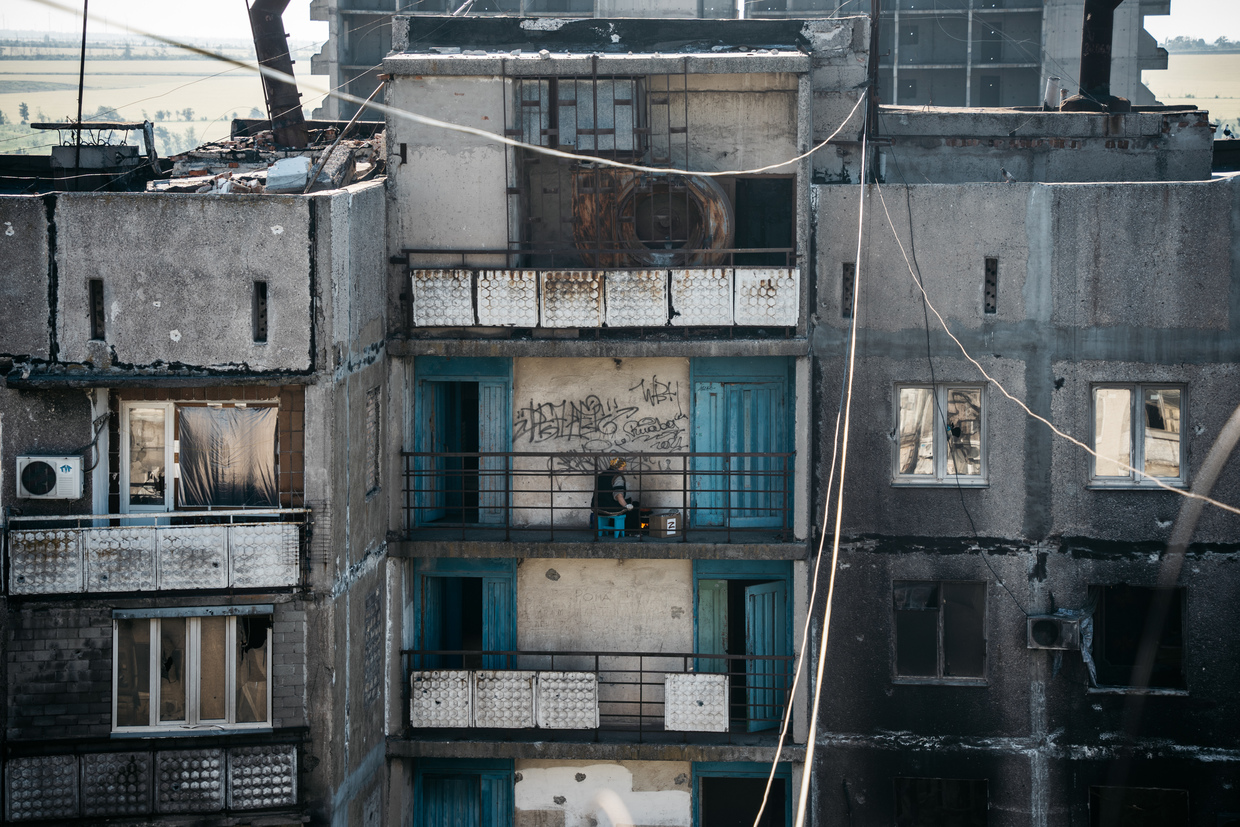 A local resident cooks breakfast on the balcony of a building hit by shells © RT / Arseniy Kotov, special report for RT

In December 2022, Mariupol resembled a huge construction site. Construction workers from all over Russia and even other former Soviet republics are rebuilding the city. 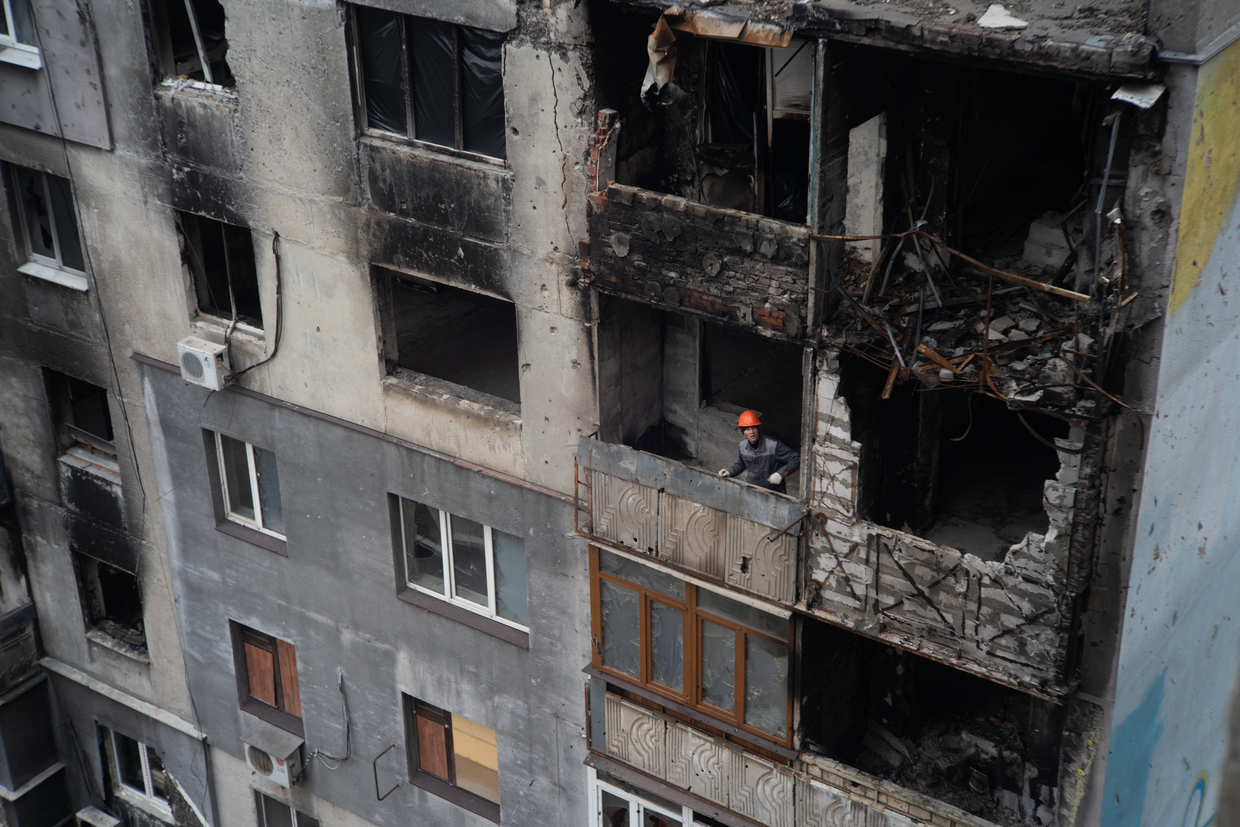 A large part of Shevchenko Boulevard remained untouched. As a result, it’s now the most bustling part of the city. The market here is booming. Since supermarkets and all major stores have been robbed and destroyed, locals now flock there to buy all sorts of goods: from technical appliances to fruits and vegetables from nearby villages. 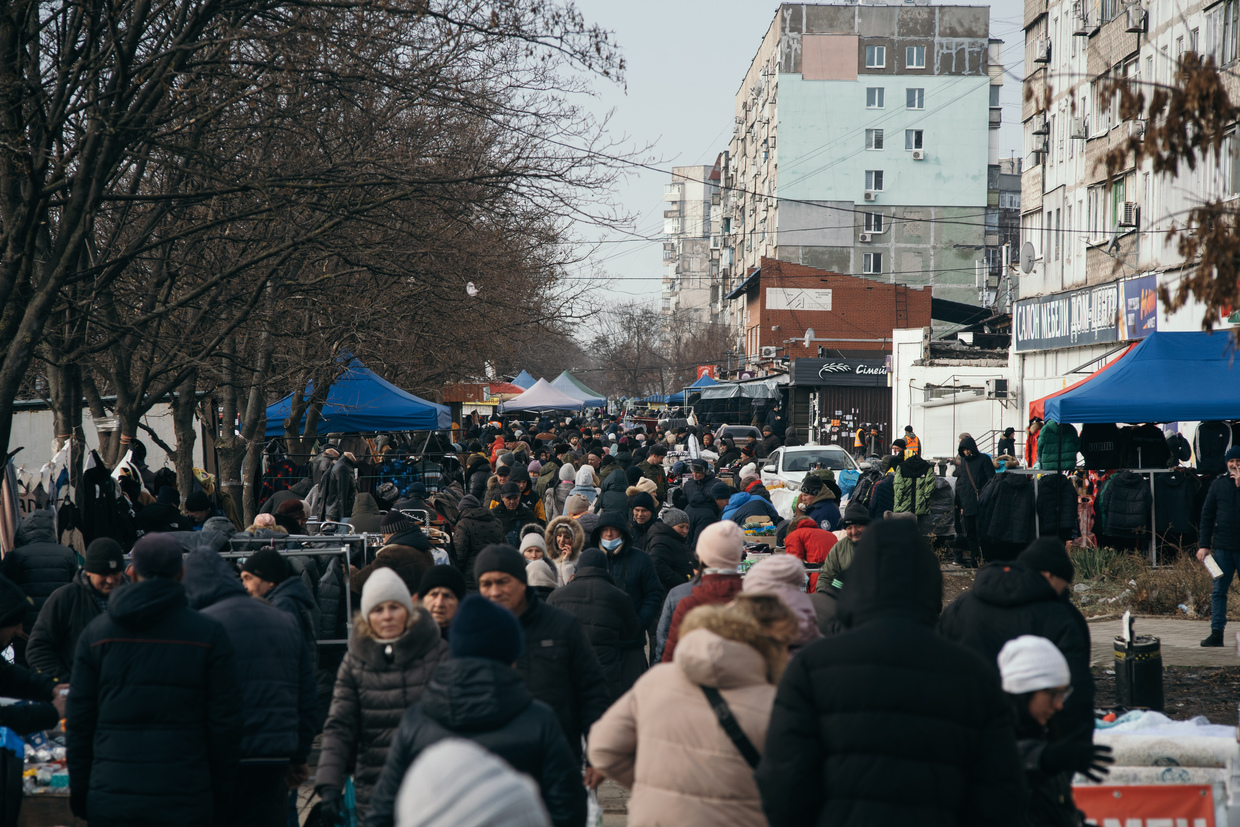 Many buildings at the further end of Metallurgov Prospect avoided major damage. The few that were affected are being repaired by construction workers from Russia. 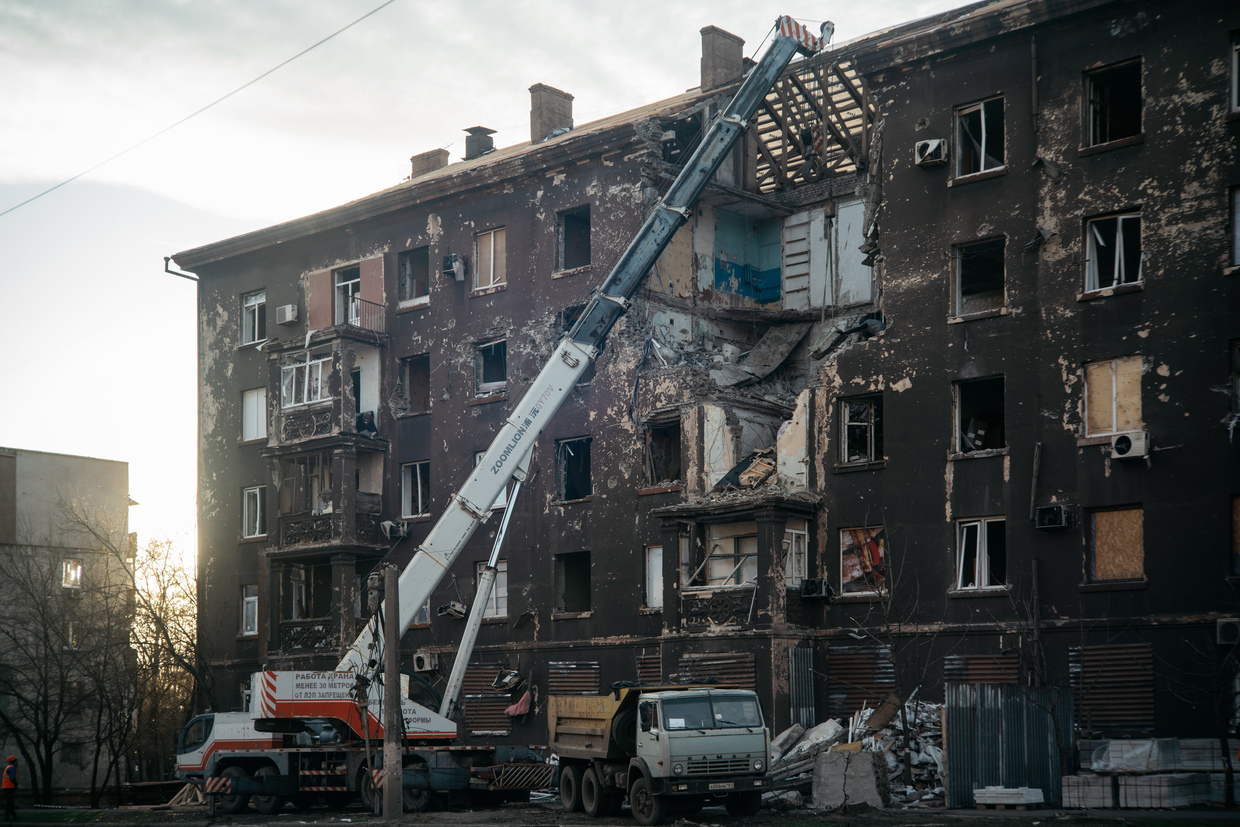 Specialists have been evaluating all the buildings in Mariupol and deciding whether they can be reconstructed. Where possible, the damage will be repaired. The remaining strictures are being demolished. 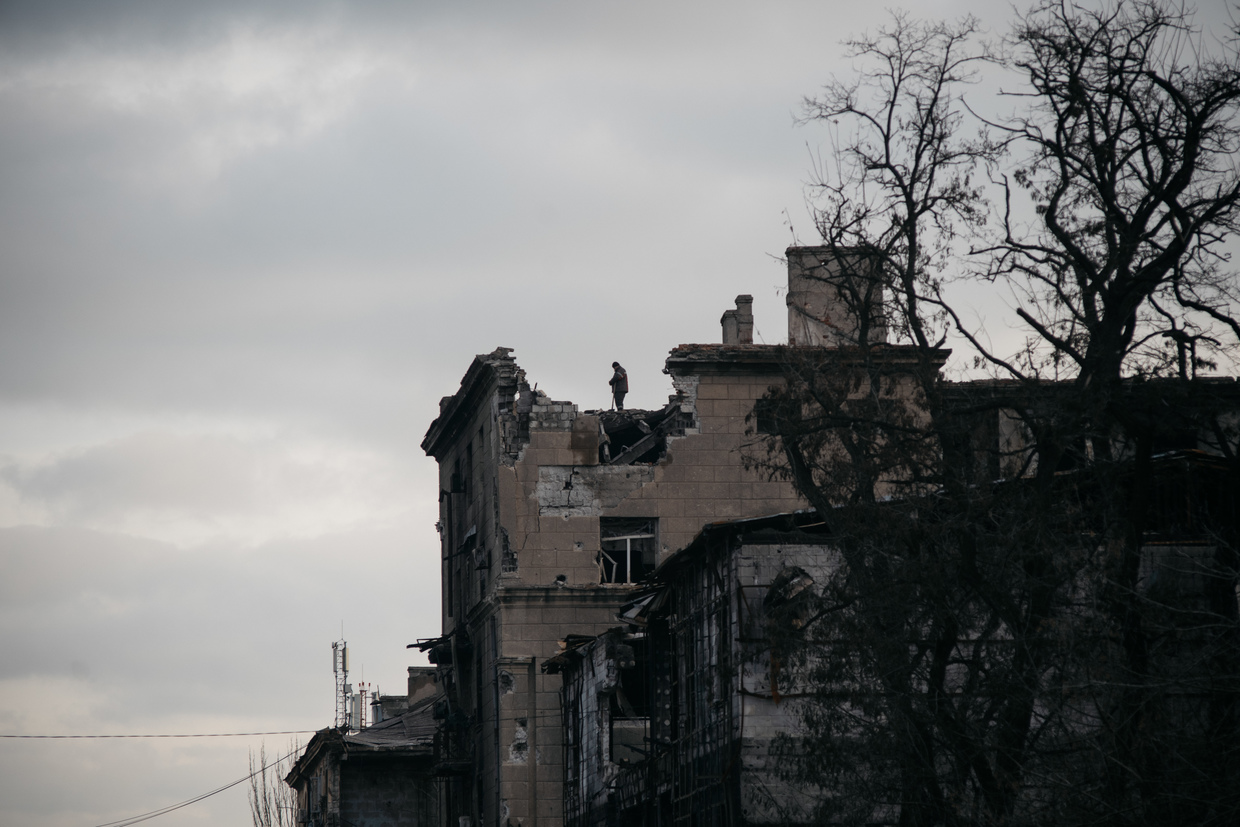 Construction work at the site of a residential building on Arkhip Kuindzhi street © RT / Arseniy Kotov, special report for RT

Brick buildings are easier to fix up than so-called panel buildings, made of concrete blocks. When a panel is damaged, it must be removed and replaced with either bricks or a new panel. But in the case of brick buildings, holes from shelling can be quickly mended with bricks. 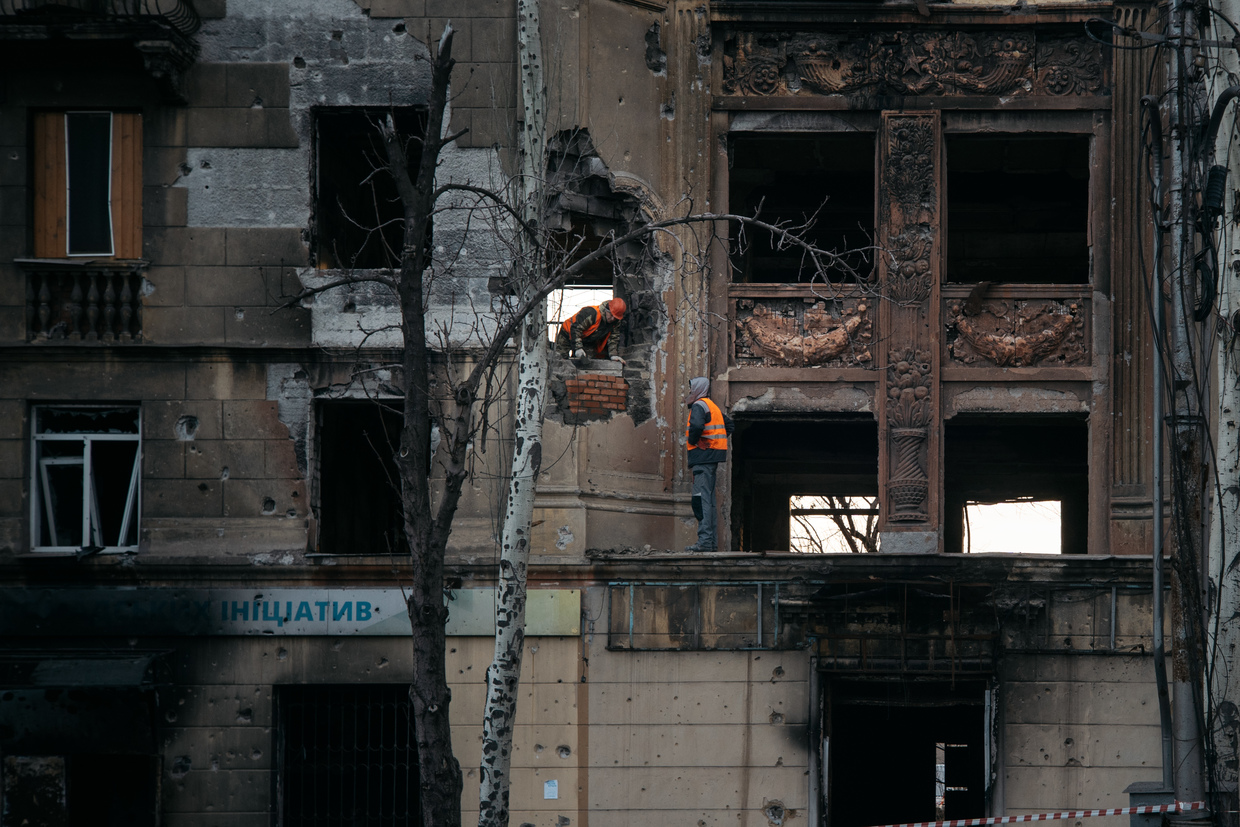 Even fully intact buildings will be subject to capital repair. Roofs, pipes, radiators, and windows will be replaced in most of them. Costs will be covered by the Russian government. 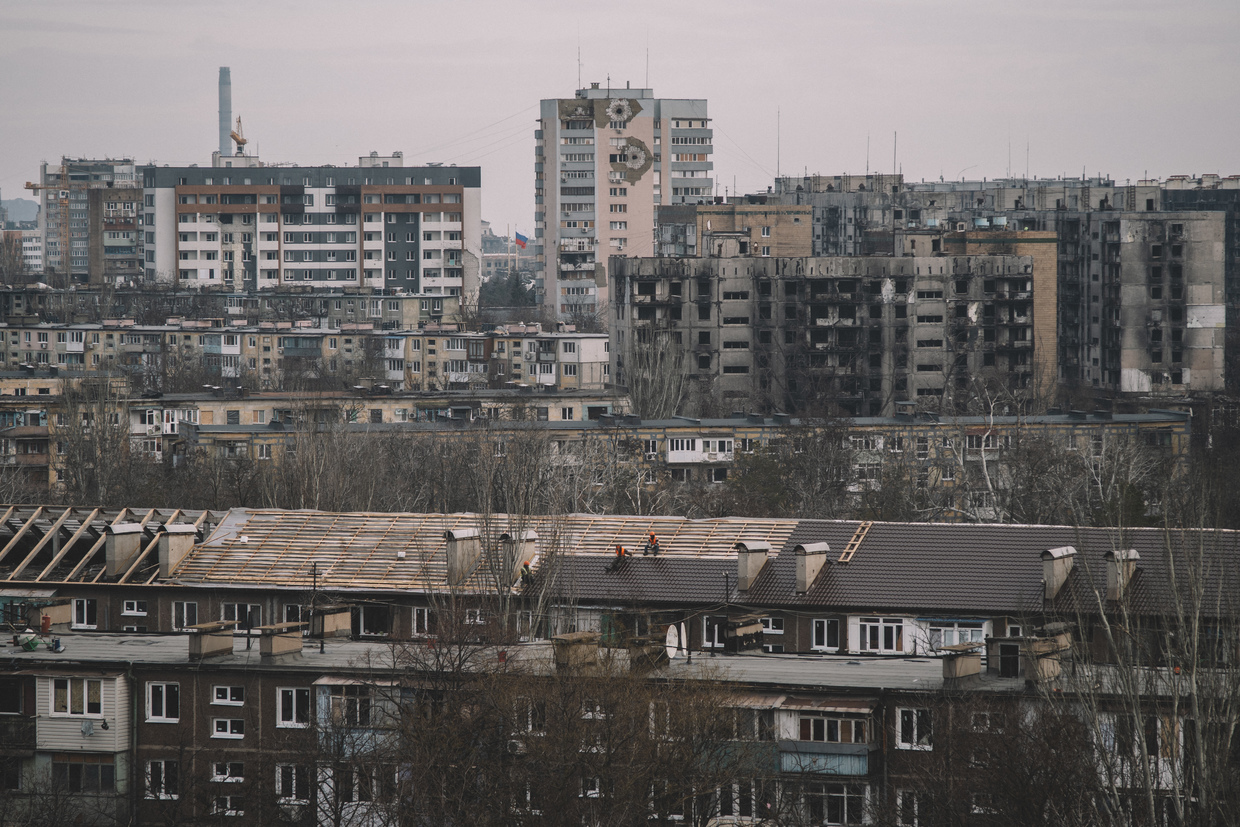 Almost all of the administrative and residential buildings in the central district were damaged during combat, including churches and chapels. 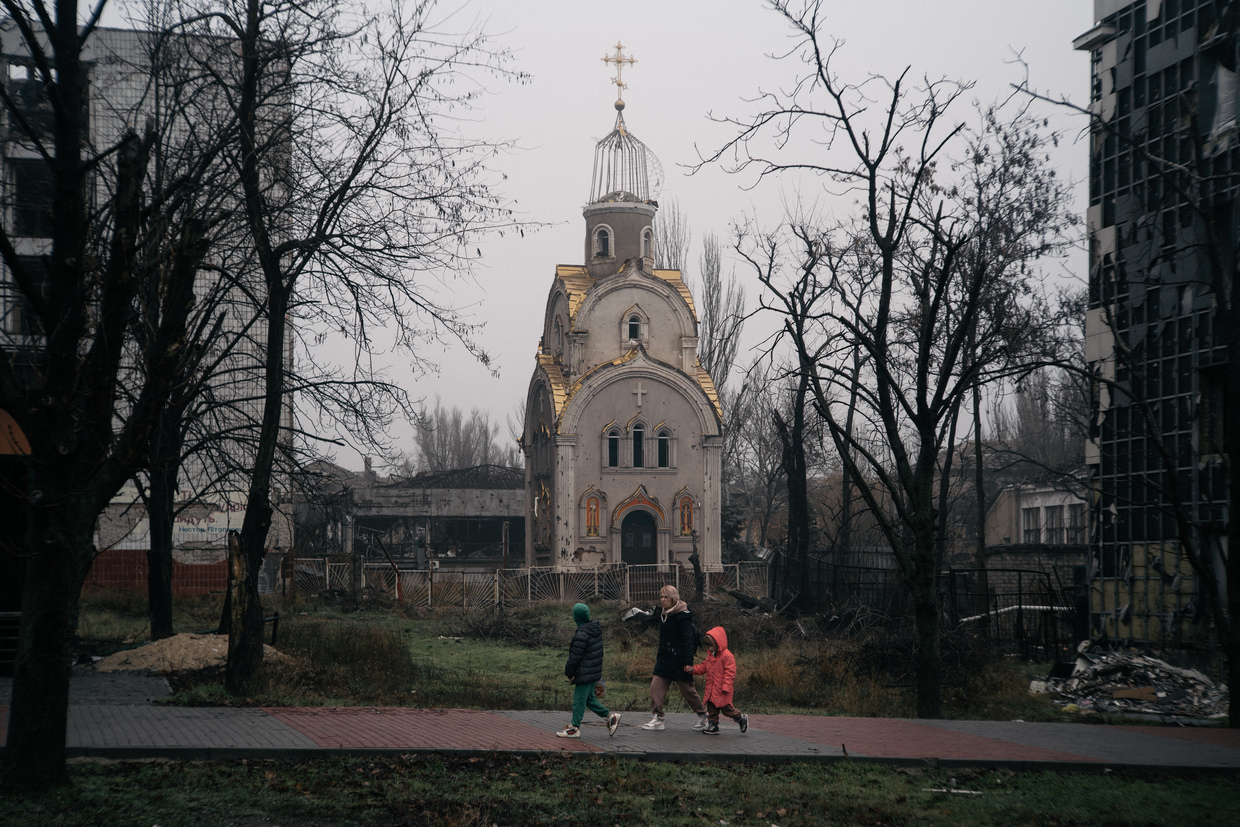 Most of the demolition work is carried out with excavators, manipulators, and other construction equipment. Panel buildings are demolished quickly – it takes about a week to tear down a nine-story building. 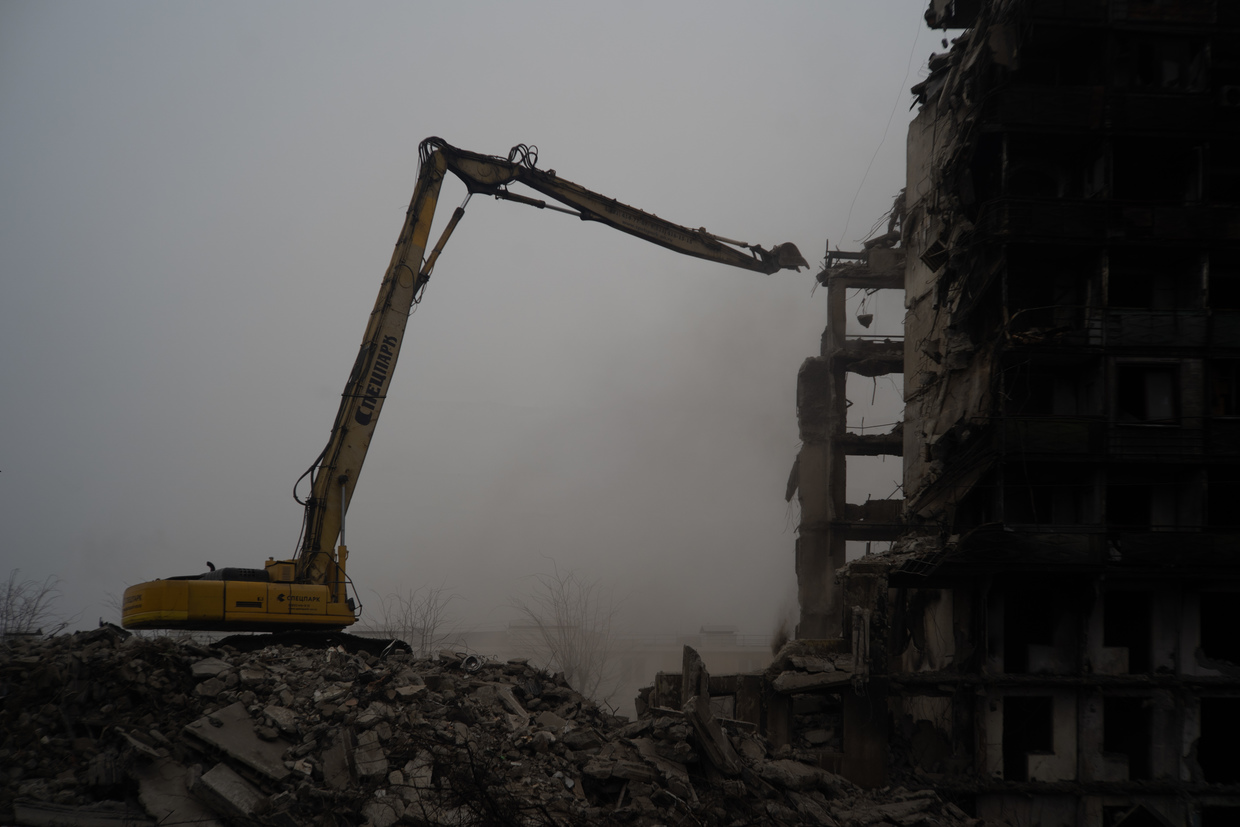 The boiler house (its pipes are visible in the foreground) was launched in the fall, just in time for the heating season. In the beginning of December, construction workers also replaced the roofs of nearby buildings. 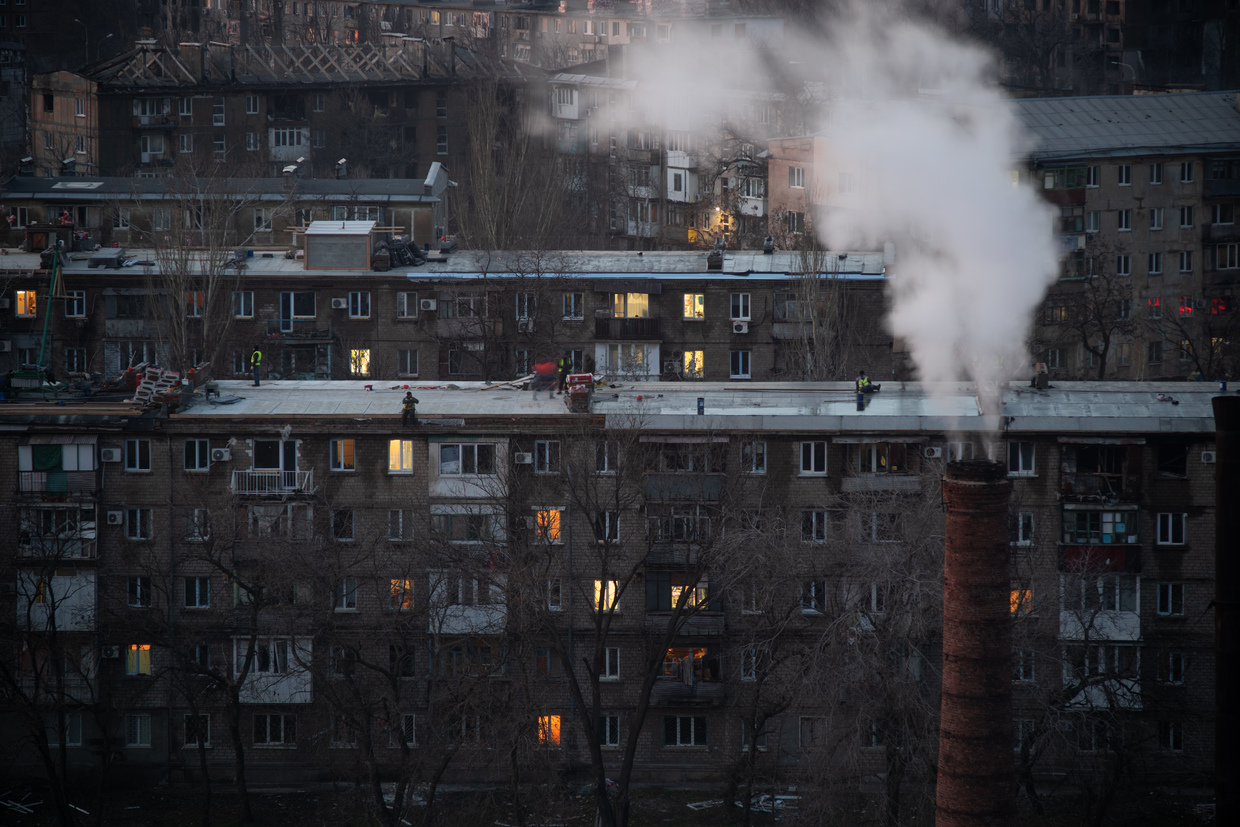 These houses in Mariupol were among the first to be reconstructed. By December, a large part of the interior work was done, windows were replaced and the exterior renovation was nearly complete. 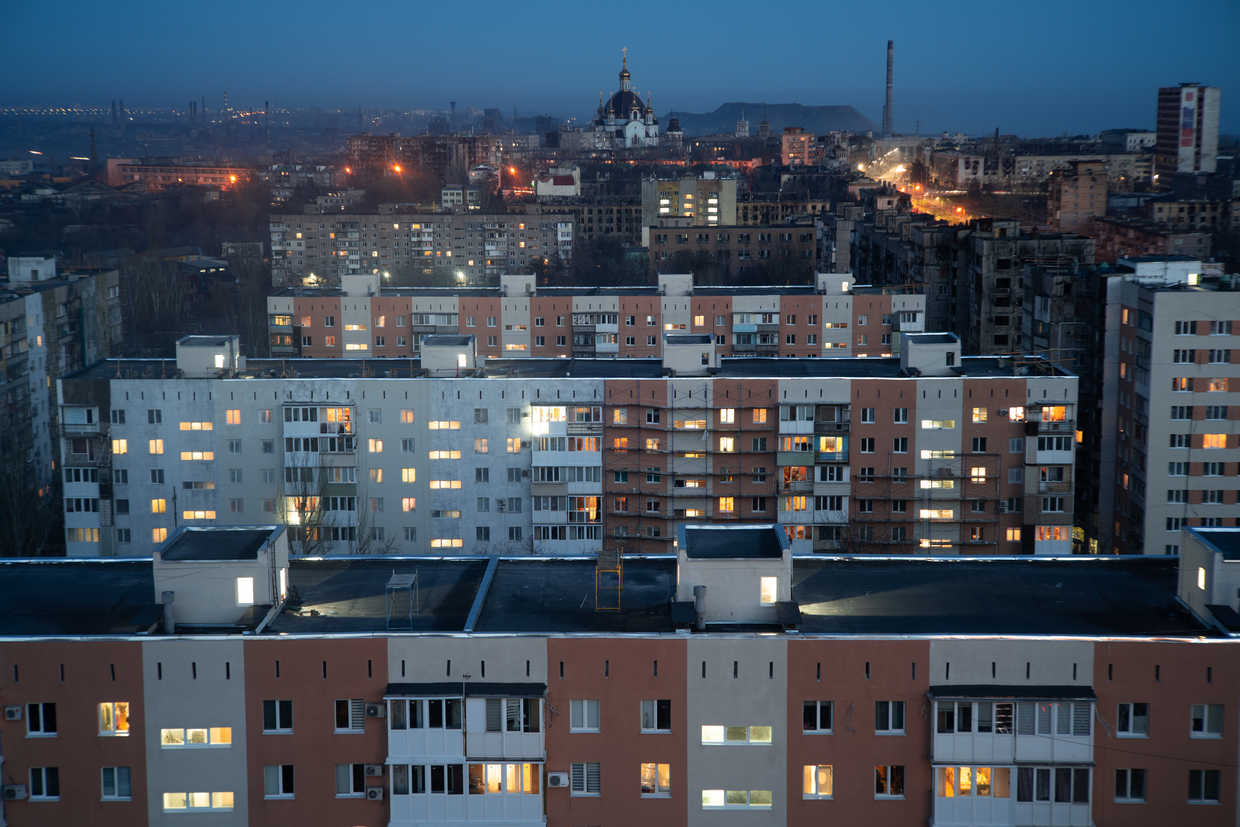 A mobile cafe chain called “Mariupol Is Russia and That’s It” [a play on the name of the Russian fast-food chain “Tasty and That’s It”] appeared on the streets of the city last fall. I haven’t tried it yet, but the cafe is popular with locals and workers. 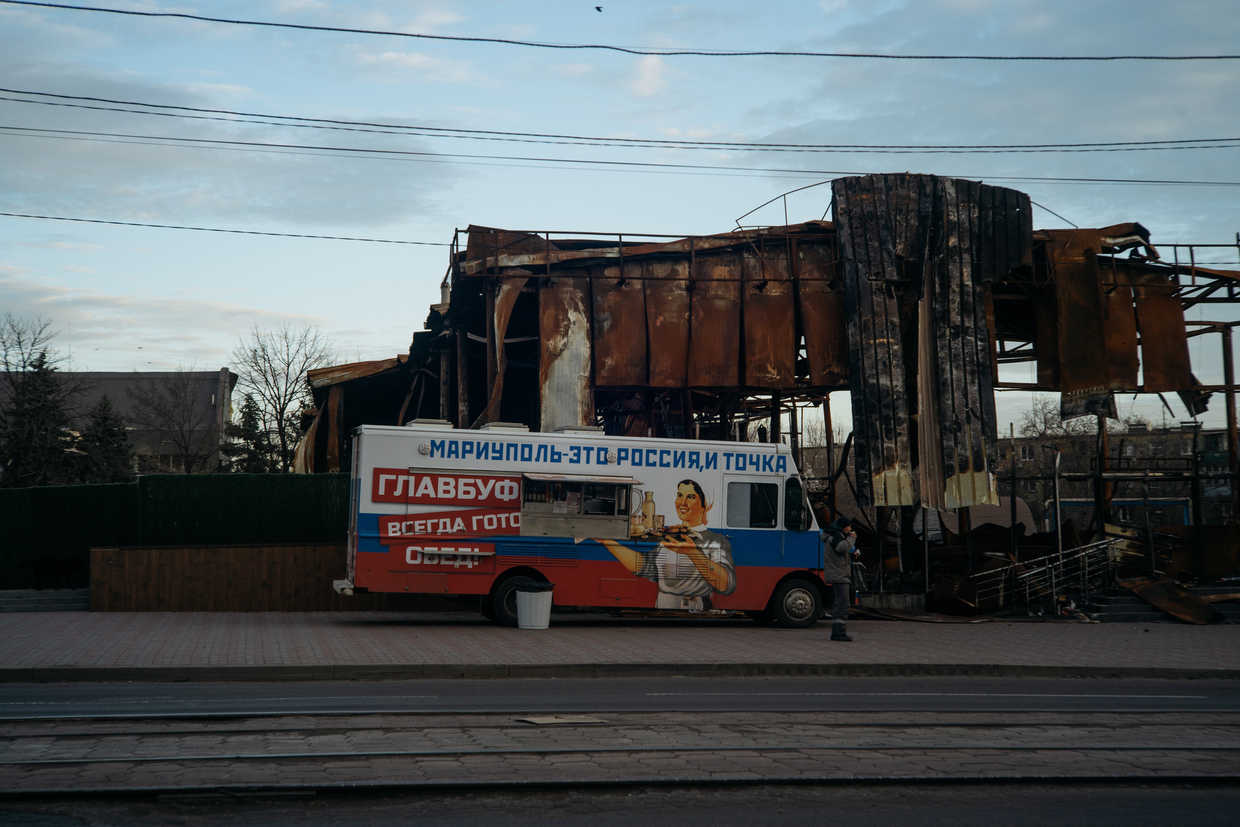