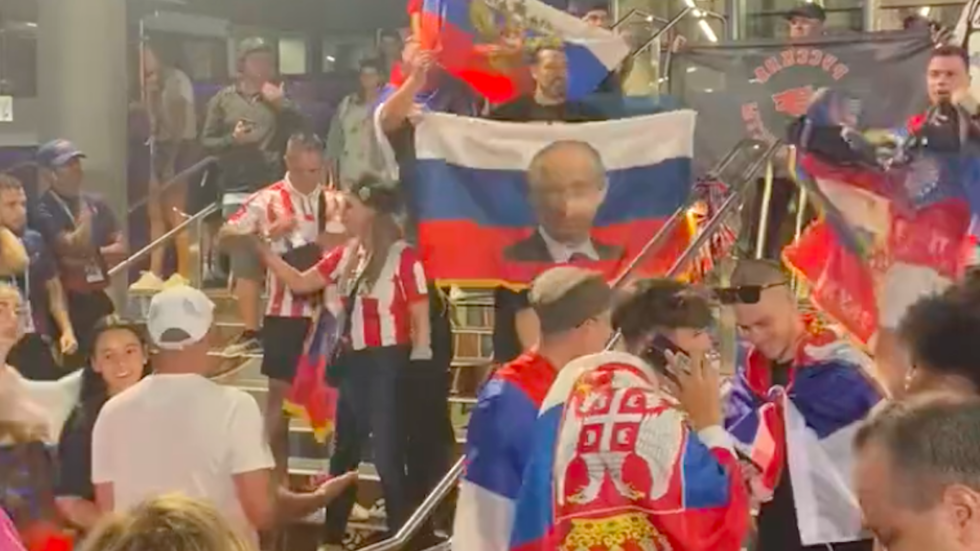 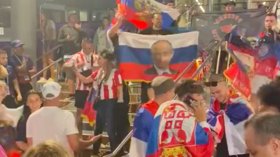 Four people were detained and questioned by authorities after a Russian flag bearing the image of President Vladimir Putin was displayed at the Australian Open Grand Slam tennis tournament following a match between Serbia’s Novak Djokovic and Russia’s Andrey Rublev.

A group of people congregated outside the Rod Laver Arena in Melbourne after Djokovic’s comprehensive three-set win, with chants of “Serbia, Russia” heard from the group, while a man wearing a ‘Z’ symbol on his T-shirt was also seen to be displaying the Russian flag.

Another man was spotted wearing a ‘Z’ shirt inside the arena during the match.

It comes after the organizers of the event, Tennis Australia, introduced a ban on the display of Russian and Belarusian flags shortly after the beginning of the tournament, when a fan displayed the Russian tricolor during a match between Ukraine’s Kateryna Baindl and Russian player Kamilla Rakhimova.

Russian and Belarusian players are free to compete at the tournament but without mention of their nationalities or other national symbols.

‼️🇷🇸🇷🇺 #Serbian fans brought the flag of #Russia with a photo of Vladimir #Putin and the flag of the DPR to the central stadium of the Australian Open. pic.twitter.com/rfXZevsXsI

“Four people in the crowd leaving the stadium revealed inappropriate flags and symbols and threatened security guards,” Tennis Australia said in a statement.

“Victoria Police intervened and are continuing to question them. The comfort and safety of everyone is our priority and we work closely with security and authorities.”

The incident comes several days after Russia’s Andrey Rublev complained to the chair umpire during his second-round match with Finland’s Emil Ruusuvuori that supporters were verbally abusing him during the match, and draping a Ukrainian flag over advertising hoardings.

“It was more that they started to tell me bad words and bad things.”

One Russian player, Karen Khachanov, remains on the men’s side of the draw and will play Stefanos Tsitsipas in Friday’s semifinal, while two Belarusian female players, Victoria Azarenka and Aryna Sabalenka, are on course to meet in the Australian Open final provided they both win their semifinal matchups on Thursday.